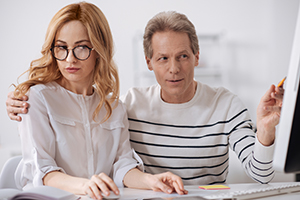 Every New York City and New Jersey employee has the right to work in an environment that is free of intimidation, discrimination, and sexual harassment. Unfortunately, many employees face workplace situations that are oppressive and demoralizing without realizing that they have legal rights. If you believe that you have experienced a hostile environment in the workplace, you may be eligible for monetary damages. Contact the Akin Law Group’s  Hostile Work Environment Attorneys in New York City and New Jersey for a free legal consultation today 212-825-1400.

A hostile work environment involves harassment or unlawful discrimination that creates an oppressive, offensive, or distressing atmosphere. These conditions must be severe or pervasive enough that they interfere with an employee’s ability to work, or change his or her employment status. Changes to employment status may include failure to promote, demotion, loss of benefits, constructive discharge, or termination. Both supervisors and coworkers can render a workplace intimidating or offensive. According to New York City and New Jersey laws, employers are liable for the actions of supervisors who play a role in creating a hostile work environment.

In order for a workplace to qualify as a hostile work environment, several conditions generally must be filled:

If you have faced any of these circumstances at work in New York City or New Jersey, contact a hostile work environment lawyer at the Akin Law Group as soon as possible to discuss your legal options.

Many hostile work environment cases involve recurring behavior that creates a pervasively intimidating or oppressive workplace. However, if an incident is severe enough, it can make a workplace permanently unbearable for an employee. Even if the incident was isolated, it could have impacted the employee to such an extent that it interferes with his/her work performance.

Not all disagreeable or uncomfortable workplaces can be called “hostile” in the legal sense of the word. In Oncale v. Sundowner Offshore Services, the United States Supreme Court stated that Title VII of the Civil Rights Act of 1964 is “not a general civility code.” In other words, the federal law does not protect against offhand comments, incidents that are not very severe, or rude behavior.

In evaluating a claim under federal and state laws, both the frequency and severity of the harassment must be considered. These circumstances are judged from the perspective of a reasonable individual in the employee’s position. However, if severe enough, even a single act of harassment can render an environment permanently hostile.

Those individuals employed in New York City (Brooklyn, Bronx, Manhattan, Queens or Staten Island) are more advantageous. New York City Human Rights Law offers more extensive protection than state and federal laws. Incidents that would not be considered severe according to federal or state criteria may be valid within the City of New York. An individual that is harassed in any manner may present a case, where the issue of severity is for consideration of damages only.

The New Jersey Law Against Discrimination protects NJ employees from a hostile work environment under a variety of protected classes including race, creed, color, national origin, disability, ancestry, nationality, marital or domestic partnership, age, civil union status, sexual orientation, sex (including pregnancy), and gender identity. In the event that your boss is constantly verbally insulting you or treating you differently based on your age, there is a high chance that you are a victim of a hostile work environment. In New Jersey, disparaging treatment must qualify as pervasive and severe by an individual with managerial or employer status. If you believe your employer’s verbal abuse is minor but incessant, that could also be grounds for exposure to a hostile work environment in New Jersey.

In Williams v. New York City Housing Authority, the Court held that the NYCHRL, was to be construed independently of, and more broadly than, its federal (Title VII) and state law (NYSHRL) counterparts.” In particular, under the NYCHRL (Section 8-107(7)), the “retaliation or discrimination complained of … need not result in an ultimate action with respect to employment … or in a materially adverse change in the terms and conditions of employment …” In rejecting the “severe and pervasive” test used by the federal and state courts, the purpose of the NYCHRL is to “create workplaces with zero tolerance for harassment and discrimination.” Hence, under New York City and New Jersey laws, frequency and severity are only matters of concern for establishing the scope of damages.

Because a hostile work environment often involves continuous violations, incidents that do not fall within the time limitations for making a claim may still be considered in federal court. As long as one incident that contributed to the hostile conditions in the workplace occurred within the limitation period, the entire set of events is considered timely for the objectives of determining liability (according to the court in National R.R. Passenger Corp v. Morgan). However, acts that occurred outside of the time limits will not be considered by the EEOC, the New York State Division of Human Rights, or the New York City Human Resources Administration in reviewing your claim. Filing late may have a negative impact on your case, even if several incidents happened within the bounds of the time limit. Because of this, it is crucial that you file a complaint as soon as possible if you believe you have faced a hostile work environment.

With regard to the EEOC, the filing period for hostile work environment complaints is 300 days. Although individuals that miss the 300 day limit cannot utilize Title VII or the EEOC, they are not without recourse. This time period, when filing with the City and State of New York and New Jersey is three years. Despite the three year statute of limitation, expeditious filing of a complaint is prudent to preserve evidence and witnesses. Because some of the forms involved in filing a complaint may be confusing and/or involve legal knowledge, it is best to consult an attorney who can help guide you through the process. If you have any questions about the process, please contact the lawyers at Akin Law Group, who have extensive knowledge about claim filing procedures.

If you believe that you have experienced a hostile work environment, but are not sure about whether it qualifies, contact one of the Akin Law Group’s lawyers to set up a free consultation. Even if the environment was not extremely severe, you may be eligible to file a complaint.

Don’t Let a Hostile Working Environment Hold You Back

Many individuals hold back from filing complaints because they are afraid of retaliation or demotion. However, once a claim is filed, the activity of the employer is closely scrutinized giving the employee additional protection. Even if an investigation concludes that the activity of a supervisor or coworker was not responsible for creating a hostile work environment, you will remain protected by the law.

Don’t hesitate – if your employer is responsible for creating an unbearable work situation for you, it is time to fight back.

Call the Akin Law Group immediately at 212-825-1400 for a free consultation if you feel that you have been a victim of a hostile work environment resulting from sexual harassment or discrimination. Our New York City and New Jersey attorneys are passionate about fighting for employees’ rights to a healthy and secure working environment.