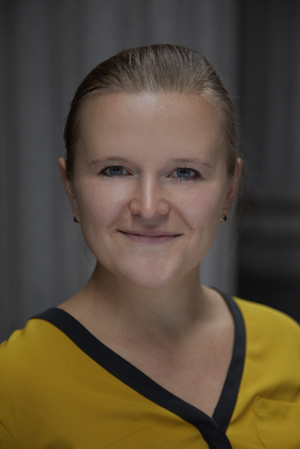 Olena Tatura is an Attorney duly admitted to practice in the State of New York. She received her B.A. in Law (2005 to 2009) and having received a Special Advance degree (2011-2012) from the National University of Ostroh Academy in Ostroh, Ukraine, studying law, Mrs. Tatura has dedicated herself to the pursuit of law and justice. Prior to her admission to the New York State Bar, Ms. Tatura had also received a Paralegal Certificate from Queens College Professional and Continuing Studies (2013 – 2014) completing her studies with high honors.

Mrs. Tatura, having completed numerous studies in Law, has dedicated her professional career to protecting the rights of all workers, especially the underprivileged. Mrs. Tatura has been serving the sexual harassment, employment discrimination and FLSA clients at the Akin Law Group for over 4 years. Mrs. Tatura communicates with the firm clientele in a sensitive, compassionate and considerate manner while helping them present their claims in the best light possible, gathering the necessary information and documentation. She is a zealous advocate for all the clients that she represents, always pursuing their best interest.

Sexual harassment, by definition involves a request for sexual favors, sexual conduct, sexual acts and sexual advances whereby (1) submission is either explicitly or implicitly a condition affecting an individual’s employment; (2) the behavior is sufficiently severe and pervasive as to create a hostile work environment, (an environment where the employee is prevented from performing their usual activities because of the hostility); or (3) the behavior persists despite objection by the employee that is being sexually harassed.

Mrs. Tatura is well aware that, although there are no age limits to being made a victim of sexual harassment, young woman are more often subjected to sexual harassment at work. The young woman, some entering the workforce for the very first time, appearing more vulnerable, are specifically targeted by predatory co-workers, supervisors and managers looking to fulfill and satisfy their sexual desires at the expense of these woman.

Hostile work environment on the other hand occurs when unwelcome conduct of a sexual nature creates an intimidating, threatening or abusive working environment and is to such severity and with such persistence that it affects a person’s ability to perform their regular activities at work. Often times it may involve a person being subjected to pornography, being spoken to in a sexually hostile manner, told lewd comments, or subjected to profanities and vulgar language. While a person engaging in the sexual harassment often has seniority, is a manager or supervisor, or otherwise has some form of authority over the person being sexually harassed, that is not always the case; the harasser can be a co-worker of the person being harassed, or a non-employee like a costumer or an independent consultant. Regardless of the classification, anytime an employee is subjected to a hostile work environment, the employer must take corrective or remedial action.

Despite the great emotional and psychological toll to these young woman, the hostile work environment created by these predatory managers/supervisors often goes unreported. These sexually deviant predators rely on the inexperience and lack of knowledge associated with young woman, knowing that they will be less likely to resist the sexual harassment and the hostile work environment or be more easily coerced because of their inexperience or their fear of retaliation.

It is also true that many employers target woman that are in financial despair, that are earning the minimum wage (or less), that are immigrants (unable to speak English), or those that are single mothers looking to support a family. Often times, these woman are subjected to quid pro quo sexual harassment whereby they are informed that they will receive a raise or a bonus if they give into the sexual harassment and/or engage in sexual activities dedicated to protecting the rights of all workers, especially young woman.

If you feel that you have been subjected to sexual harassment, call the office at 212-825-1400 and consult with Mrs. Olena Tatura, an experienced sexual harassment lawyers / employment discrimination attorney at the Akin Law Group.