What is Sex / Gender Discrimination at work? 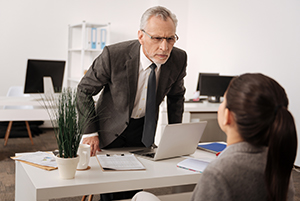 Is Sex / Gender Discrimination against the law?

The law requires that male and female employees be treated equally. This means that men and women in the workplace should be subject to the same policies, standards and practices in all phases of the employment process, including:

An employment policy or practice that applies to everyone, regardless of sex, can be illegal if it has a negative impact on the employment of people of a certain sex and is not necessary to the operation of the business.

What are some examples of Sex / Gender Discrimination at work?

Hiring/Firing/Promotions: A woman applies for a job for which she is well qualified, yet the Company only calls men in for the interview (even when the men are less qualified or less experienced); a company decides to downsize to save money, yet only woman are laid off despite men with less seniority; on the reverse side, a man applies to be a waiter, yet the restaurant only calls women in for the interview; a woman who has been with the company for 5 years with great reviews is denied a promotion which is given to a man that has only been with the company for one year.

Are there laws against Sex / Gender Discrimination?

In New York City, New York State, and in New Jersey both local and federal laws protect victims of Gender / Sex Discrimination.  In New York City the Administrative Code of the City of New York § 8-101, in New York State the Human Rights Law, Executive Law § 296, in New Jersey the Law Against Discrimination (N.J.S.A. 10:5-12) and on a Federal Level Title VII of the Civil Rights Act of 1964 (42 U.S.C. § 2000 e) are all designed to protect employees against sex and gender discrimination in the workplace. These laws make it illegal for an employer to discriminate against an individual in the hiring, firing, promotion, and other terms and conditions of employment because of their sex / gender.

Who is covered by the employment discrimination laws?

The laws provide protection for all individuals regardless of whether they are current employees or are seeking employment with the company (job applicants). In addition, as long as your claim is within the statute of limitation period, these laws also protect former employees (people that have already been fried or denied the rights and benefits to which they are entitled but for the gender discrimination). Although there are some limitations based on company size (ex. Title VII only applies to companies with 15 or more employees), State and City laws are more lenient. If you feel that you have been discriminated, call one of the employment discrimination attorneys at the Akin Law Group right away.

New York and New Jersey laws, in addition to Title VII and the Equal Pay Act of 1963 (EPA) 29 U.S.C. § 206(d) makes it illegal for employers to discriminate on the basis of an employee’s sex for the payment of wages and benefits.  As mandated by the EPA, No employer shall discriminate between employees on the basis of sex by paying wages to employees of a certain gender at a rate less than the rate at which it pays wages to employees of the opposite sex for equal work which are performed under similar working conditions.  Regardless of whether the employee underpaid is a man or a woman, any amounts owing to the employee (which faced gender discrimination in violation of the EPA) shall be deemed to be unpaid minimum wages or unpaid overtime compensation which will further allow the employee to recover liquidated damages in addition to interest, costs and attorneys’ fees.

Is it illegal to give different benefits to male and female employees?

It is against the law for an employer to discriminate between men and women employees with regard to benefits even if there is a different cost to the employer based on gender (for example, life insurance premiums may be hire for men than they are for woman and health insurance premiums may be higher for women than men; even in cases like this, the employer must provide the same benefits to both sexes).  An employer cannot make benefits available for the wives of male employees where the same benefits are not made available for the husbands of female employees or allow coverage for children of female employees while denying coverage for the children of male employees (including individuals that are gay or lesbian);

Can an employer require different dress codes for men and women?

An employer who requires employees to wear uniforms which are different for males and females is not engaging in discriminatory practices as long as the uniforms for both males and females are “suitable.” For example, a female employee cannot be forced to wear a short skirt or a sexually revealing uniform; likewise, a male employee cannot be required to wear extra tight pants to show off his crotch or buttocks. More so than gender discrimination, this may be classified as sexual harassment although it can also be gender discrimination if directed towards a particular sex (ex., a policy stating that “all woman must wear skirts that are six inches above the knees”).

Is my employer required to allow me to breastfeed on the job?

Absolutely. Section 7 of the Fair Labor Standards Act (FLSA) requires employers to provide reasonable break time for an employee to express breast milk for her nursing child for one year after the child’s birth each time such employee has need to express the milk. Employers are also required to provide a place, other than a bathroom, that is shielded from view and free from intrusion from coworkers and the public, which may be used by an employee to express breast milk. The break time requirement became effective when the Affordable Care Act was signed into law on March 23, 2010. Although employers are not required under to compensate nursing mothers for breaks taken for the purpose of expressing milk, where employers already provide compensated breaks, an employee who uses that break time to express milk must be compensated in the same way that other employees are compensated for break time.

Can an employer discriminate based on marital status?

Discrimination based on marital and/or parental status is also a type of gender discrimination. Assumptions and stereotypes about gender identity generally motivate discriminatory acts based on marital and/or parental status. New York law prohibits employers from treating employees differently because of their status as single or married, or because of their status as parents in all phases of employment, including recruitment, hiring, firing, training, advancement, compensation, benefits and other terms or privileges of employment.

Transgendered people can face serious discrimination in the workplace, generally because of a failure to conform with traditional sex stereotypes or gender roles. Transsexual employees are protected from discrimination under federal, state and local laws. Title VII (see Price Waterhouse v. Hopkins, 490 U.S. 228 (1989) makes it illegal to discriminate against transgender workers. The New York City Human Rights Law (“NYCHRL”) not only prohibits discrimination in employment, public accommodations, and housing, it also prohibits discriminatory harassment and bias-based profiling by law enforcement. In October 2015, Governor Cuomo became the first executive in the nation to issue state-wide regulations prohibiting harassment and discrimination on the basis of gender identity, transgender status or gender dysphoria. In New Jersey Lesbian, gay, bisexual, and transgender (LGBT) persons have the same rights and responsibilities as heterosexuals. LGBT persons in New Jersey enjoy strong protection from discrimination, and have the right to marry as of October 21, 2013.

What’s the difference between sex discrimination and sexual harassment?

What are the remedies for gender discrimination?

If you feel you have faced discrimination because of your gender/sex, contact the Akin Law Group immediately at 212-825-1400 for a free consultation and learn your rights. We create a stress-free environment for you to discuss your case with a qualified gender discrimination lawyer.